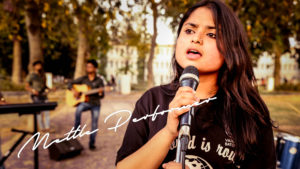 Founded on June 21, 2012, on the occasion of the World Music Day. Although this club or this genre of music had its presence in the music milieu of AMU since the early seventies, Dr. Parvaiz Imam gave the first public performance in 1987 with hawain guitar. The music culture was much promoted by African and Middle Eastern students residing in Aligarh under various educational exchange programs.

1991 saw the advent of ‘Spooky Charms’ by Ritwik Ghosh and some Commerce and Engineering College students.

2012 – ‘Mash –treaty’ by Mehul Kumar, Atif Nafees, Umair Khan, Abhishek Noel and Atif Admi. The band Mash-Treaty was adjudged as MTV band of the year award in 2014 in the competition of 100 bands held at Kingdom of Dreams, Gurgaon.

Dr. Aminul Islam (Assistant Professor, Department of Chemistry)- He is a very active member of his department, with key areas of work such as; Analytical Method Development and Validation; Solid-Phase Extractive Column Preconcentration; Tailor-made Selective Chelating Resin; Metal analysis. On the other hand, he keeps a keen interest in western music.

Mr. Faraz Farooq (Assistant Lecturer, Department of Architecture) – He is an assistant professor in the Department of Architecture, with thrust areas like; inclusive & equitable urban planning, transit-oriented development, and landscape urbanism. Besides this Dr. Faraz Farooq possesses immense zeal for music, he is an excellent guitarist. He loves to write and travel.